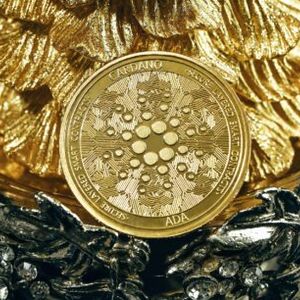 The Cardano price has declined steeply over the past trading sessions. The altcoin currently trades within a descending triangle pattern. This means that the coin could be headed for further decline unless it manages to break past a few vital price ceilings. Over the last 24 hours, ADA declined by 1.3%. In a weekly timeframe, the altcoin price has been hovering around the same range. In recent weeks, the Cardano price has reached new highs. This reading is tied to bullish price action; however, the bulls lost vigor. It is safe to say that ADA is, at the moment, in a price correction phase. ADA mustn’t lose two of its essential price floors. This would mean that the bears could be taking over. Since the coin currently depicts a descending wedge, it could be possible that ADA might touch its closest support level. After revisiting the support line, it is likely to bounce back again. The altcoin’s market capitalization has also noted a decline, which corresponds with a fall in the asset price. Related Reading: Bullish Sentiment Spikes As Axie Infinity Price Propels 9%, What’s Next For AXS? Cardano Price Analysis: One-Day Chart ADA was exchanging hands at $0.31 at press time. The immediate resistance for Cardano was at $0.34; the bulls tested this level, but the altcoin met with selling pressure. The two major resistance levels for the coin stand at $0.34 and $0.36, respectively. ADA was trading extremely close to its crucial support line of $0.30. The bulls might lose stamina, pushing the coin to $0.28. Cardano’s price will plummet if it fails to stay above the $0.28 mark. The amount of ADA traded in the last session increased and was red, depicting bearish sentiment and selling strength. Technical Analysis Investor confidence in the altcoin has been steadily declining in recent months, and despite ADA making slight progress, demand has languished in recent weeks. The Relative Strength Index fell below the 40-mark and was nearing oversold territory. In this case, ADA could fall through at $0.28. Due to lower demand, the Cardano price moved below the 20-Simple Moving Average line. This meant that sellers were driving the price momentum in the market. Movement above the 20-SMA line will help buyers regain confidence. Even in a shorter time frame, the overall price momentum pointed toward negative price action. The Directional Movement Index, which depicts a trend’s price movement and strength, was bearish. The -DI (orange) line was above the +DI (blue) line. The Average Directional Index was moving below the 40-mark; this could indicate that the altcoin’s present price momentum could depict a turnaround. The Chaikin Money Flow remained positive as the indicator was above the half-line, displaying that capital inflows still dominated outflows at press time. Related Reading: Bullish News For Polygon! zkEVM Mainnet Is Coming Soon, Says Co-Founder Featured image from Unsplash, Chart: TradingView.com

Get Crypto Newsletter
Market Cap
24h Vol
41.65%
Bitcoin Share
87
Today News
Read the Disclaimer : All content provided herein our website, hyperlinked sites, associated applications, forums, blogs, social media accounts and other platforms (“Site”) is for your general information only, procured from third party sources. We make no warranties of any kind in relation to our content, including but not limited to accuracy and updatedness. No part of the content that we provide constitutes financial advice, legal advice or any other form of advice meant for your specific reliance for any purpose. Any use or reliance on our content is solely at your own risk and discretion. You should conduct your own research, review, analyse and verify our content before relying on them. Trading is a highly risky activity that can lead to major losses, please therefore consult your financial advisor before making any decision. No content on our Site is meant to be a solicitation or offer.